The Upper Rio FM Society is in the process of a complete makeover of the ‘Hub’ which is located on Gibson near Truman. This page will be used to communicate and record progress on that project. We hope to have the first phase of the upgrade completed by the end of the calendar year. This phase will result in a linking repeater system that is functional but not yet optimized. The second phase of the project will address any operational issues that may arise such as coverage, volume levels, intermod, etc. as well as an update to user documentation on how to operate the system.

NOTE: The repeaters are still operational in stand alone mode. Each repeater works as before — they just can’t be linked until the upgrade project is completed.

Still to do: Clean up and test the antenna farm on the tower, make several jumpers, and inter-connect all the equipment.

We are getting close folks. Stand by!

Here are a few pictures

As reported on this site, in mid October the Upper Rio FM Society’s linking computer went down hard. We are not exactly sure what the root cause was but computer’s power supply and motherboard both failed. The computer system and the software that controled the repeater network were quite dated and repairs were difficult. A computer with a full size ISA card slot and support for CGA graphics was needed. Those of you that are old enough to know what that means know that you don’t just go out and purchase new hardware like that.

After an enormous amount of help from Guru Stu at Sandia Computers  (including time spent over a weekend) we were able to boot the computer but we were not able to connect to the linking hardware. This could have been a result of minor differences in the new computer’s motherboard or graphics card or the linking hardware could have also been damaged in what ever event caused the computer to fail.

Fortunately, the Board of Directors had already been working on a plan to modernize the entire Upper Rio Fm Society repeater fabric. Repeater hardware at the various remote sites (based on old commercial radios ) had already been replaced with modern Kenwood TKR repeaters. However, the ’90’ repeater at the Hub, the linking radios at the Hub, and the switching fabric were on hold while a paperwork SNAFU with the state of New Mexico was straightened out and formal agreements with the Air Force were put into place.

When the repaired computer was unable to access the switching electronics the Board of Directors decided to not invest any more time and money into a system that was about to be replaced and the modernization effort at the Hub was put on a fast track.  Ronney Sluga (KB0PMY)  and Conny Jonsson (N5HC) are leads on the project. To date we have

Currently on order are

When complete, all of the existing “home brew” and re-purposed commercial radio equipment will be replaced with commercial off the shelf components. This will allow us to stock spare components and modules and thus respond to system failures very quickly. Overall system reliability and audio quality will be greatly improved.

The new switching fabric will be based on a Voice over Internet (VoIP) system known as Asterisk. While based on Internet protocols, the system will not rely on the Internet. Rather a short backbone will be built at the Hub and the repeaters will be connected to the backbone through commercial interface boxes. Linking will be managed via the well supported Asterisk software system.

More information will be posted here soon. Until then, here are some pictures. Click on a picture for a hi-res version. 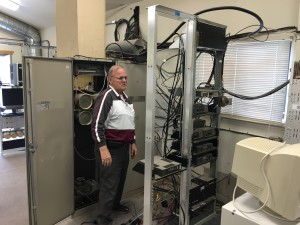 <– Here is a picture Jim Hunter, URFMSI President, looking at the back of the linking radio rack before the dismantlement effort. Note the use of re-purposed commercial radios.

And here is a picture after dismantlement 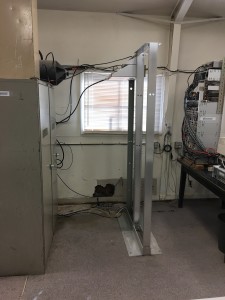 We will certainly not miss the old linking radios 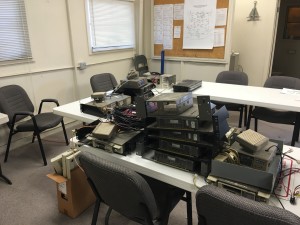 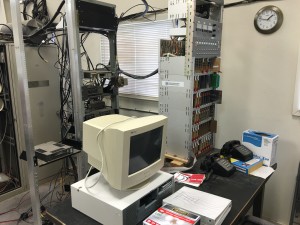 The linking electronics and the computer software that controlled it were truly a work of art and something well ahead of its time. This entire rack of home-brew electronics will be replaced by an Internet switch and a handful of playing card sized interface boxes. The image below – right shows the back of the linking electronics. Note the extensive use of wire-wrap technology. The electronics are now completely disconnected from the network and ready to be removed. 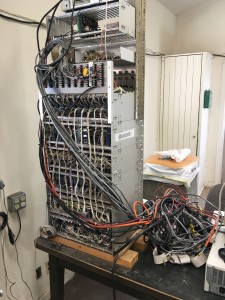 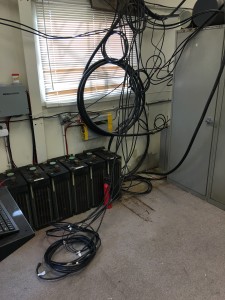 As part of the Hub upgrade the area where the antenna feed-lines penetrate the building (which has been ad-hoc to date) will be completely reconfigured with a high quality feed through system with all the proper lightning protection. The feed-lines in the foreground will be the first to be cut to length and connected to the new feed through system. 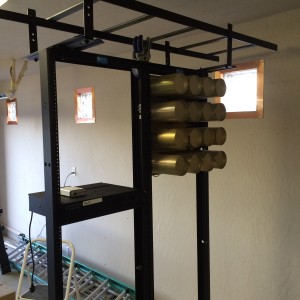 Here are some recent pictures of the new equipment build-up. More will be posted soon. 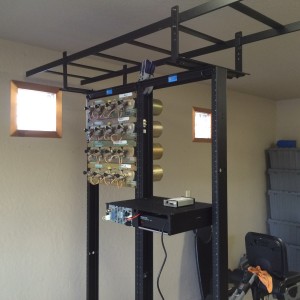